Who Is Premiere Home Theater Seating?

In 1973, at the early age of 21, Michael Laurino left his secure Job at Xerox Corporation to pursue a passion of music, stereo equipment and people, to start a small stereo store in Venice, California. Family and friends all ridiculed him for leaving the security of this corporate career to start a business that all thought was doomed to fail. With the Grand Opening of his small, 400 square foot store, Michael finally felt fulfilled and was ready to conquer the World. After the first year, Michael had an opportunity to move into a space on the Blvd and expand by nearly four times the space. With little business experience, but a load of passion, Laurino was on his way. But, within a four year span, Michael found that sitting in a store waiting for customers to discover his business, while meeting manufacturers representatives coming to visit him, that this might be a better avenue for him. In the summer of 1977, made what seemed to most as a rash decision to have a liquidation sales and move into the wholesale arena. Michael sold off everything in 48 hours and hit the road. Finding manufacturers to represent wasn’t the easiest task, but his passion drew companies to him looking for someone like him with energy and spunk. By 1979, he was becoming recognized as the new bread of reps and soon another successful firm wanted Laurino to join their team. Soon, the Southwest Marketing Company was formed and Laurino took total control in just a few years. Over the next 10 years, Laurino received awards from every company he represented and launch one of the first rep/distribution companies in the industry.

In the early 90’s, Michael Laurino, founder and CEO of PremiereHTS ( www.premierehts.com ), was continuing in his field of expertise. He was starting his third decade in the Home Theater Electronics industry as a veteran entrepreneur in both sales representation and distribution for some of the finest products in the electronics industry. Honored with over 40 sales awards, Michael’s company, WestWorld Marketing & Distributing, was well positioned in southern California and recognized as a leader in this exciting field. He was also beginning to develop his own products for national distribution, beginning with Prewire™, a line of custom installation wire & cable, along with Revelation Cable Interconnects.

While attending his 25th consecutive CES Show in Las Vegas, NV and representing his company’s stable of fine products Michael’s next opportunity presented itself. WestWorld Marketing was appointed to represent one of the finest European lines of theater seating at this show. With his long history in the field, Michael had come to be known as a visionary and was in contact with other representative principals around the country who were moving into the home theater seating category also. After a short stint with this European seating company and driving them to number one, Michael saw an opportunity in the domestic manufacturing arena to compete at a more aggressive price point.

In March of 1999, Michael’s departure from this European seating company was the motivation to launch Premiere Home Theater Seating. He spent the next 7 months developing product and searching for a manufacturing partner for their introduction at the 1999 CEDIA Show in Indianapolis, IN. in September. Michael felt there was a tremendous market being ignored by the competition. Once an appropriate partner was signed, he worked closely with his manufacturing partners to develop the most unique design in modular theater seating in the industry. This patent pending design allowed for ease of installation and layout. The cost saving ideas allowed for the finest materials to be implemented and improve the comfort over the competition. The product was a tremendous success. With the introduction of the Encore and Studio models, PremiereHTS was on the map. By January 2000, PremiereHTS debuted its StereoLoungerline of occasional furniture to compliment the already successful MovieLounger™ line of motion seating, which was growing rapidly.

Over the next two years, PremiereHTS would introduce product innovations, quality Italian designs, and value that have yet to be matched. Now with 14 styles and over seventy leathers and hundreds of designer fabrics, the selection is limitless. The introduction of Lifetime frame and mechanism warrantees also moved PremiereHTS ahead of the competition. The marriage of “The Electronic Home Theater Expert” and his furniture-manufacturing partners has proven to be a combination that can never be duplicated.

In 2002, PremiereHTS executed its most aggressive advertising and marketing expansion. PremiereHTS is ready to help design your dream home theater with our excellent team in place. Mark Kingsbury, Chief Operations Officer and D-Tools designer, plus our professional rep organizations around the country, are all available to you for all of your theater seating needs.

Come take one of PremiereHTS’ recliners for a test thrill and see why the industry is praising PremiereHTS as the one to watch. “First Class Seating at Coach Fares” isn’t just a motto, it’s our passion. Take a tour of this extensive web site for more information. 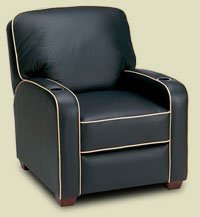 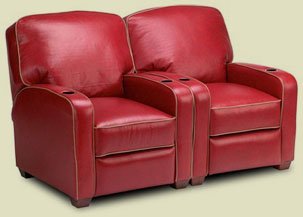